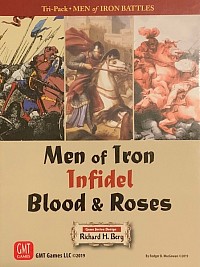 The Men of Iron series broadly covers medieval and early renaissance fighting. To date four modules have been produced. The first title, Men of Iron covers the re-emergence of infantry in the early 14th Century. Infidel covers the early Crusades period. Blood and Roses deals with the Wars of the Roses and finally Arquebus looks at the battles for Northern Italy 1495 - 1544.

It is described as an easy play system, which breaks from the usual tradition of game turns and instead has continual play in which formations attempt to activate one at a time and when a formation fails, play flips over to the other player, who will likewise attempt to sequentially activate their own formations and so it continues back and forth until a victory can be called.

In 2020 GMT re-published the first three titles and bundled them together into a single ‘Tri-Pack’ collection of 20 individual battles from Dorylaeum 1097 to Bosworth 1485.

The Battle of Wakefield 1460

In 2017, issue 31 of the C3i magazine contained a stand alone game from the Men of Iron series, covering the battle of Wakefield 1460 from the Wars of the Roses period.

It makes for a nice addition to the series. An Article covering first impressions and an AAR are posted over on the blog. LINK.