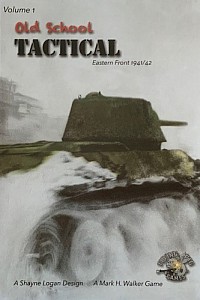 Old School Tactical by published by Flying Pig and designed by Shayne Logan covers tactical combat at a scale of 1 hex is 50 metres and each counter is a separate vehicle, weapon team or squad.

This is the box art for the first release, which covered east front 1941 / 42. The series has become established with west front and pacific core modules and four expansions that deal with, Stalingrad, Airborne, Bulge, 9th Armored and Pacific.

The genre is potentially quite complicated, but this system has some nice depth while remaining a very playable game. It is notable for its large playing board and top notch graphics. 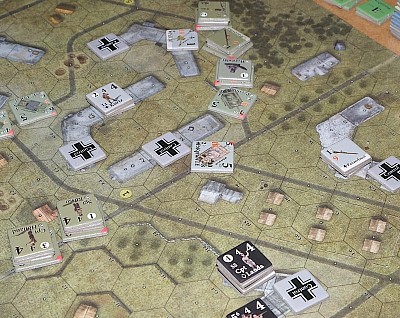 Any Day: The Ruhr pocket

This is the final scenario in the Old School Tactical ‘Phantom Division’ module, set in April 1945. It has been well thought out, with the German defenders being a ramshackle mix of units brought together, brittle but well armed, making them a potential tough obstacle and a situation that makes one think of the sad souls who lost their lives, seemingly needlessly, in the closing weeks of the war.

This is a one mapper, playing in just 7 turns, so is a good fit for a short evening of face to face gaming.

The Germans have a mix of morale levels, but an interesting touch is that for every 5 casualty points they suffer, the German morale levels across the board get worse by one point, plus a leader must actually be present with a unit for it to stand a chance of rally during the impulse phase. Collectively, this does a really good job at reflecting the brittle nature of the defence.

To win, the Americans must cause all the German forces to have a worse status than ‘good order’ or occupy 5 of the 7 objective buildings. This is an excellent map, reminiscent of the old Board 1 in the basic Squad Leader game (Avalon Hill) in 1978.

In this photo, our opening impulses brought some exciting tension as the Tiger and lead Pershing opened up in a close-up gun duel, with several shots missing and setting a narrative of crews under so much pressure to hit rather than being hit themselves, that they ‘fumble’ through the anxious moments, with a mix of panic, excitement and anxiety all plating their part. Even a Panzerfaust armed infantry section tried to get in on the action! 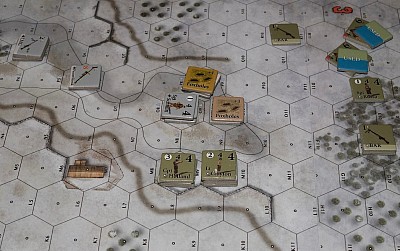 Near St. Vith, the Americans are counter-attacking to recapture the village of Elcherath and nearby high ground.

This photo shows the part of the attack against one of the ridge positions at the top of the map. This is a two mapper scenario in the pocket battles format.

To get this far, the Americans have taken heavy infantry casualties to Sergeant Russo’s 1st Platoon, so 2nd platoon under Captain Holland and Lieutenant Clayton have paused in a blind spot just under the ridge, while two Sherman tanks (under the blue used counters) move up to support the final push onto the end of the ridge.

In total there are 5 objective hexes between this part of the map and further south. To win, the Americans must capture 4 of them in 7 turns, which is a tight schedule.

At the end of turn 7, the system requires a roll to see whether the scenario is extended by a further turn. Here it is and the Americans manage to capture 2 more objectives to give them the win.

The arrival of the Sherman reinforcement is important as it helps maintain the momentum of attack, plus, in the final moments, they may be able to manoeuvre onto any undefended objective hexes …. though the German defence bristles with panzerfaust and panzerschreck anti tank weapons.

Running a trial on my Pinboard Wars table, I had a go at using the OST rules with 1/144 scale vehicles. The conversion is testing 1 hex equalling 1 inch on the table.

On the opening turn, the Germans rolled very badly for their Impulse Points, however, they did win the initiative so got to fire first. This fire was made against the 76mm armed vehicle. 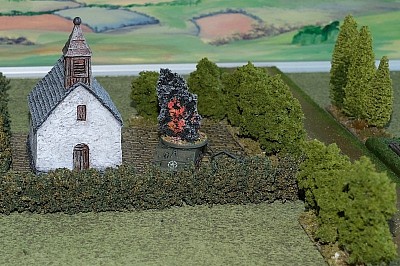 Attacking with a gun value of 13 against an armour defence of 5 (+1 for the cover of the hedge), there was every chance that if hit, the Sherman was going to be knocked out …. And it was!

In turn two, the Americans rolled really poorly for their Impulse points, denying them the chance to reverse out of trouble before the Panthers did what panthers do!

The Shermans in the cornfield managed to hit one of the Panthers and cause it to go ‘Shaken’, but the remaining Panther got lucky and hit both Shermans, destroying them both. 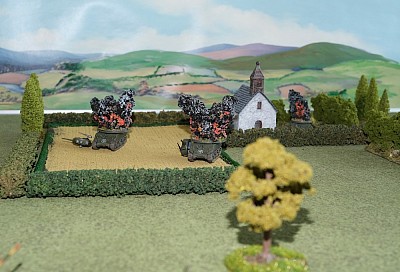 It seems to work

The conversion is quite simple, but it played with exactly the same feel as the boardgame. I now just need to bring infantry into the fray and try out the artillery rules to see how well it all works together.

To represent stacking, I will simply allow units touching count as being stacked.

At this scale, converting 1 hex to 1” seems to look and feel right.

EDIT - I have put a bit more detail up on BoardGameGeek, which shows the various stages of action. LINK 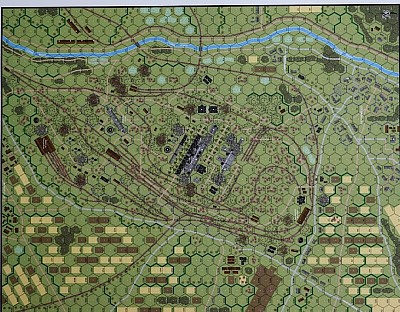 You might think this map looks very ASL like and you would be right. This is the map taken from the ‘Steelworks’ module by 3rd Party ASL producers Lone Canuck Publishing.

The subject is very interesting, so I have been looking at playing the scenarios using the ASL map, but with OST counters and rules. So far, I have just done the smallest scenario and it gave a very good game.

I have put notes, ideas and an AAR up over on the blog. LINK 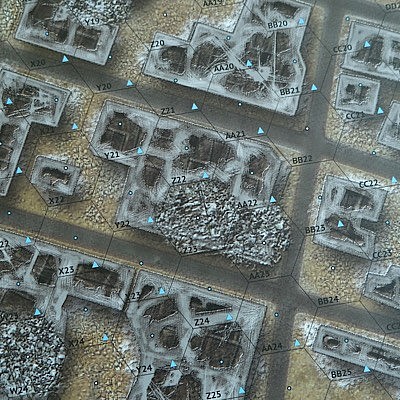 Today I played the ‘Siberians’ scenario from the Stalingrad module. The blurb says;

In the early morning hours, elements of the 284th Rifle Division were ferried across the Volga to join the fight. the rugged Siberians of the ‘Tomsk’ Division were feared by the Germans.

These hunters and frontiersmen would push back the enemy and buy the 62nd Army some time. From the beaches, Col. Batyuk’s men plough into the city’. 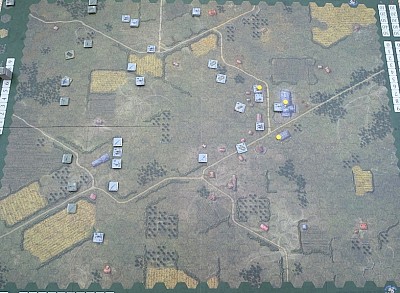 Playing the full board

The system has a few full board scenarios. This once comes from the Phantom Division module.

The Americans start by attacking from the left, but their attack is under-powered. Mid-game, they get reinforcements of tanks, engineers and assault teams …. But is it all too little too late? it felt so in my game.

The Americans really need to break into the board to capture the concentration of large buildings on the right, but here, the reinforcement got snarled up amongst the farm on the bottom left of the map and horrendous casualties, together with a ticking clock saw the entire attack stall.