Shadow of the Eagles 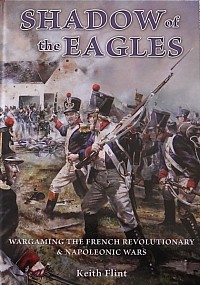 Wargaming the French revolutionary and Napoleonic wars, by Keith Flint and published in 2021 by Partizan Press.

The 118 paged hardback ruleset are described as being ‘a bit simpler than most of the established sets’. Measurements are set in inches for 25mm - 28mm figures, reduced by a third for 15mm - 20mm and converted to centimetres for 6mm - 10mm. The gaming area is a 6’ x 4’ or bigger area, with the rules intended to allow the sort of games that can be played at home or at a club in a single session.

I posted an ‘initial impressions’ article over on the blog, that gave an overview of the rules and gave an example of the charge procedure. 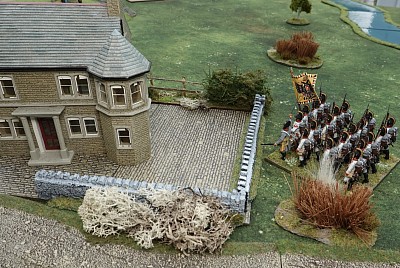 Scenario 1 from the book

Wanting to have an early go at the rules to see how things hang together, I put Scenario 1 (A Divided Enemy) onto the table. I have precious few painted napoleonic figures at the moment, so the game was played with proxies and blank bases.

The scenario has Blue force split in two by a stream. They need to unite and move onto the village to capture it and galvanise their forces there …… but Red force are already in the area  and they intend to both occupy the village and destroy Blue force before they can unite their forces.

There were a few learning moments. One being that cavalry doesn’t come off well if charging formed infantry frontally (and worse if they are in square).

I put one light cavalry and two heavy cavalry charges against formed infantry and in each case they took enough fire going in to contact, that the casualties that followed in the close combat were enough to see them retire, weakened.

A fresh French infantry battalion approached a fresh Austrian battalion that had taken up positions within the village. The French fired but suffered -1 for moving and -1 for firing against cover, while the Austrians had no modifiers.

In the unequal firefight, the French suffered and then as with the above cavalry, when they charged, they just took too many casualties and had to retire weakened. It looks tough to take a BUA.

Fighting on the actual bridge was tough, as both sides go into company column for a narrower frontage and get reduced attack dice because of that.

Grazing fire is a nice idea. Essentially this is artillery bounce. All ‘successful hits’ on the front target from artillery are re-rolled as possible hits on those in a following line (repeat with subsequent lines up to a range of 12” in total).

It seems that units really only have enough capacity for one real action or task in the game, such as taking the woods or clearing the town etc, after which they will be weakened by casualties and lose their ability to advance on the enemy.

It is important to have local leaders continually trying to rally hits off units, as once the main engagements start, casualties rack up and losses and routs start to see the forces whither away.

Likewise charging needs to be done from a position of advantage, such as having more numbers or weakening the enemy first by fire, before going in.