Wars of the Roses Project 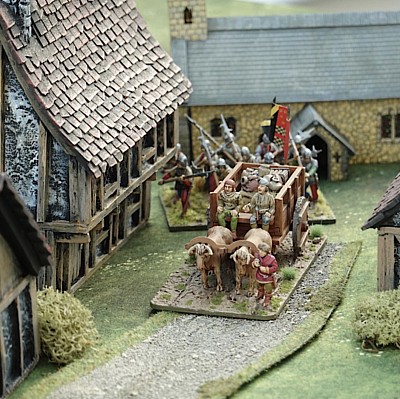 This project is looking at putting 28mm figures into a kitchen / dining table sized gaming space for some general Wars of the Roses type scenarios, but working towards being able to do a representative Battle of Bosworth game, with its mix of warriors from England, Wales, Scotland, Ireland and the European mercenaries from the near continent.

To get the larger figure onto this table, I will be using 80mm wide bases as standard to represent individual units. It is the compromise needed to make this work for me.

I am not fully settled on a ruleset yet, but in the first instance will be using Sword & Spear by Great Escape Games, while also having a little dabble with advancing my own set that were written over 25 years ago. 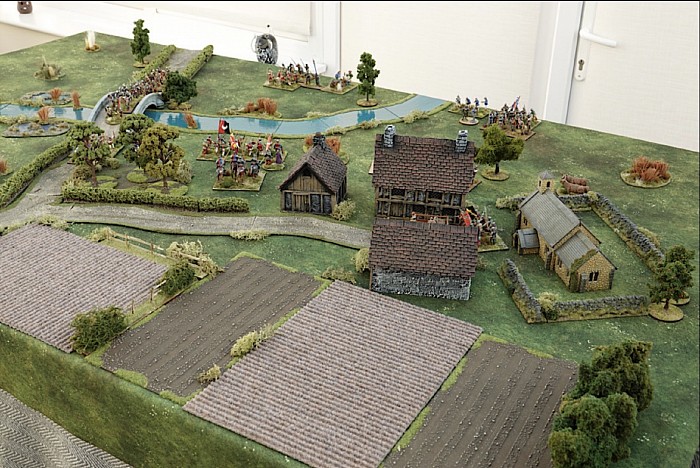 Above - Save the Treasury scenario

While the collection grows, I will be putting on some smaller teaser type scenarios. The first takes place in my fictitious parish of Piggy Longton, where Lord Darcy (Lancastrian) is trying to evacuate the recently raised taxes in his treasury from the Merchants House, before Lord Trebian of Lancastrian persuasion, attacks to steal the money.

There is a full account of the battle over on the blog. LINK 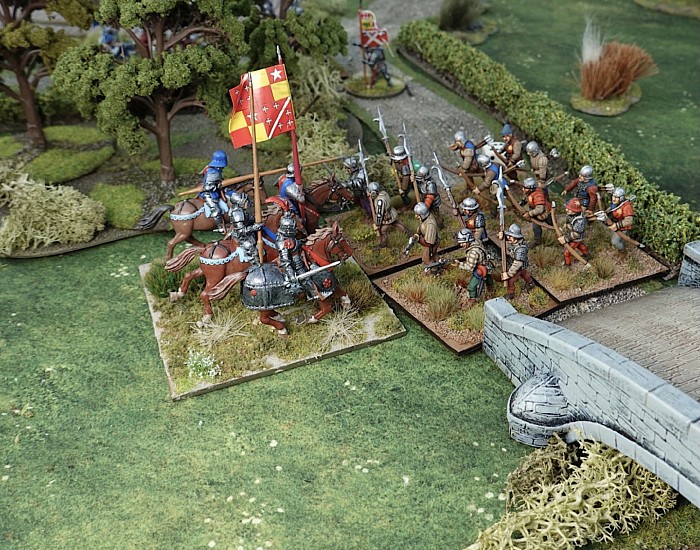 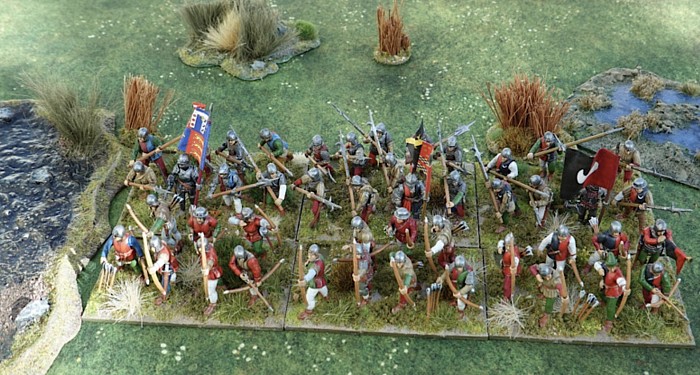 Above are 6 bases, each classed as a unit and each with an 80mm frontage. The archers are 50mm deep and the billmen 60mm deep and each has a 10mm die frame glued onto the rear edge, so that casualties / hits can be shown.

These 6 bases are drawn together into a larger formation, known as Battles, Wards or Wings, usually there are three such formations per army.

With the total frontage of the formation being 240mm (about 10”), the smaller table can quite easily accommodate three of these per side.

The period had archers and bill working together, though the Sword & Spear rules does not by default cope with this, so I am including an Action to the list of Actions that will allow a bill and bow unit to simply swap places if one is in front of the other, in contact and one of the units has been allocated a die that is at least equal to the worst Discipline Value of both units. Once done a die belonging to that side is drawn from the bag and placed with the second unit, showing the value 1 (i.e. used).

There is some extra detail on this over at the blog. LINK 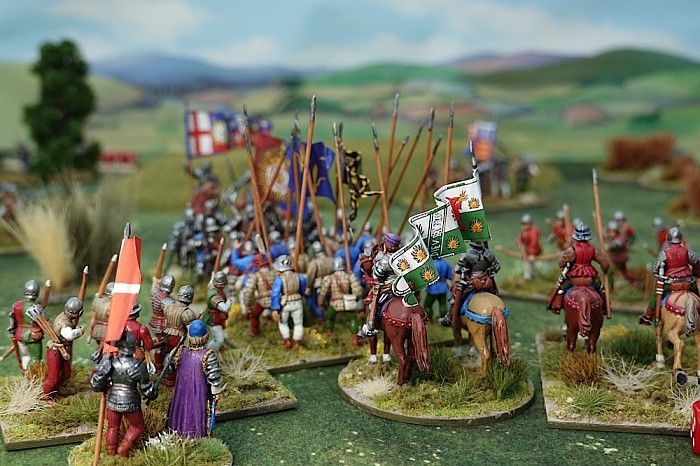 A new foreign mercenary unit has moved from the painting table into the collection. For the French long spear that appear at the Bosworth battle, I am using the pike options from the Perry plastic mercenaries box.

With 17 figures on the base, plastics keep it incredibly light. The two flags are the the French King’s Colours and a French company flag.

This scene (above and below) were taken from one of the smaller games that I have been running while forces build. There is a full AAR of the ‘Rendezvous and Ambush’ game over on the blog. 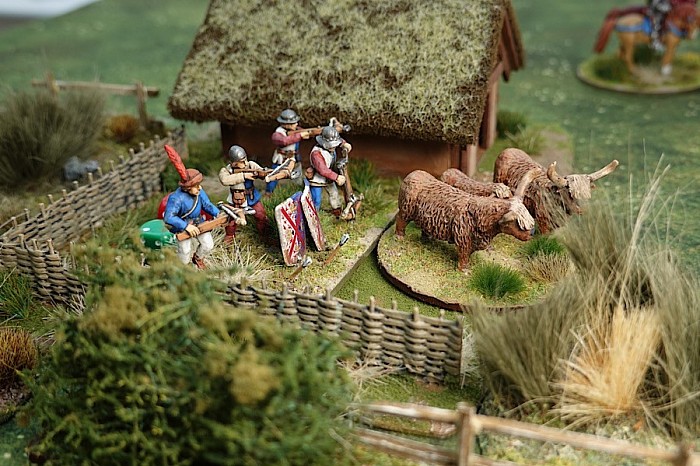 Below - Billmen under the Richard of York Banner are added to the collection, together with a Lancastrian body of Men-at-Arms under Henry Percy and a contingent of billmen under Sir Robert Baynton. 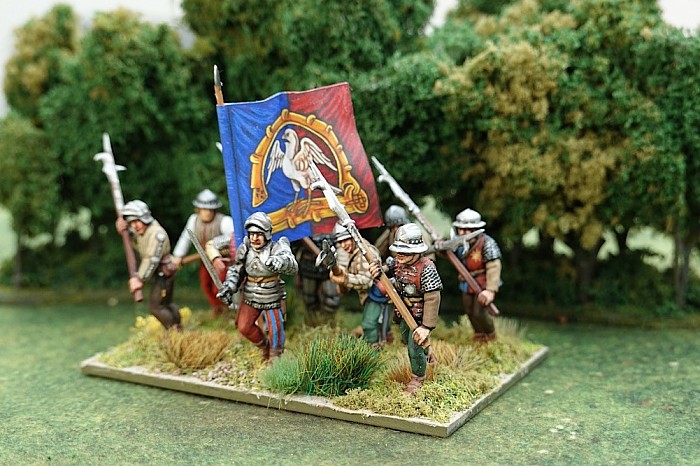 First dabble with the Bosworth theme

It is now May 2021 and enough bases have passed over the painting table to be able to put a couple of ‘wards’ on the table.

To keep things interesting, I decided to do a ‘what if’ scenario in which Percy attacks Lord Stanley. In the real battle, this area of the battlefield was notable by inactivity as both these commanders managed to spare their men of any bloodshed.

To try and keep things accurate, I did not include my pike block (French long spears) or crossbowmen, as they would have been on the other side of the battlefield (Richard’s right).

A bit of interest was brought in by allowing Stanley’s brother, Sir. William, to send Lord Stanley a variable number of reinforcements.

Sword & Spear rules were used and the action literally came down to the last dice rolls, so they must have been doing something right!

A full description is given over on the blog. 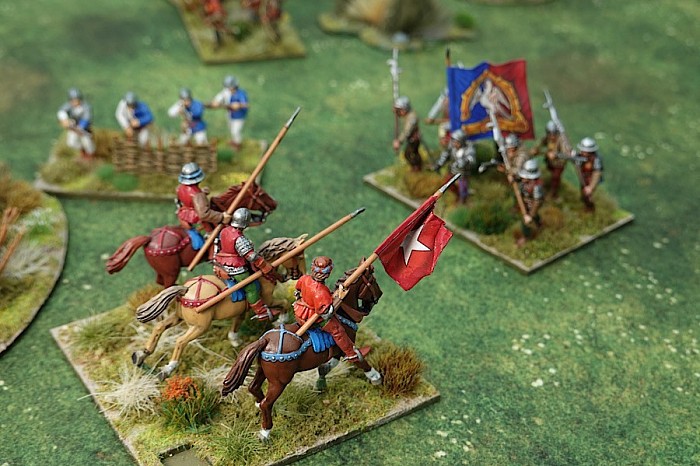 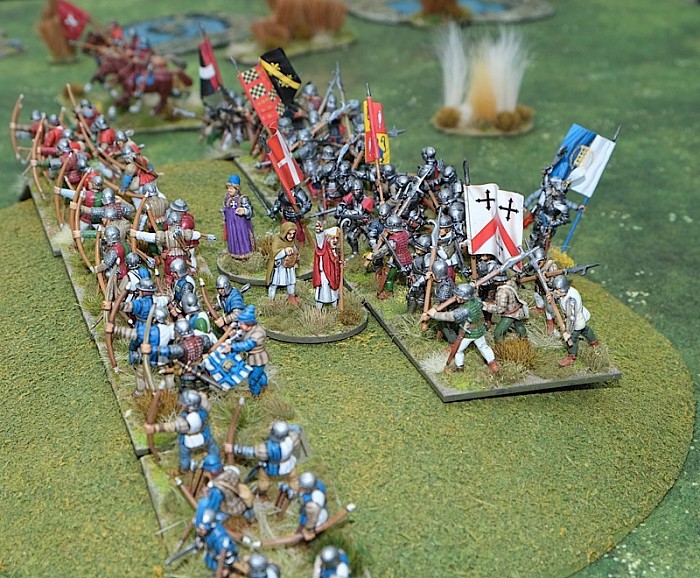 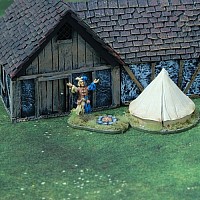 Jack is working under cover at the tavern in Piggy Longton, trying to discover where the king has been hidden.

The full story is in the Dungborough Chronicles over on the blog. LINK 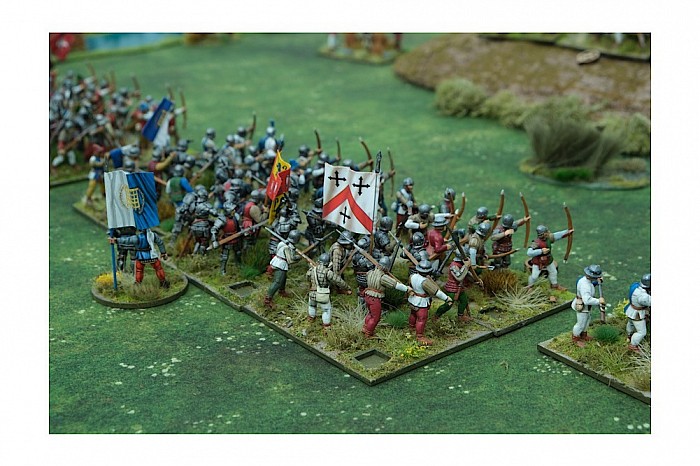 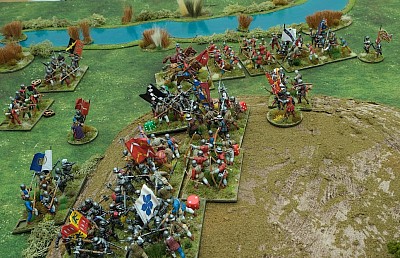 Another slice of action from the continuation of my Piggy Longton Imaginations series.

The Lancastrians have tricked the Yorkists into dividing their army, in their search for King Henry to capture him. With the enemy divided, the Lancastrians assault Piggy Longton …… but, they are not aware that other enemy reinforcements are on the way.