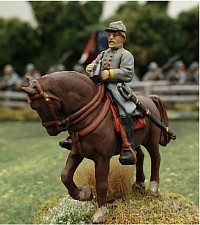 These are my own rules for the ACW period. For years they have been in a format for using with hexes, but the latest 2022 edition has created a sister set that takes the rules to the open table.

The rough conversion is one old hex equates to 6” on the table for 20 - 28mm figures and to 4” for smaller scales. So in effect, with my 28mm Pocket Armies, my table has lost a bit of space.

In addition to the move away from hexes, the two main additions are skirmisher rules and units can now accumulate multiple disorder markers.

Disorder still only has the same effect as one marker would, regardless of how many have been collected, but a unit that has gathered multiple markers will just take longer to sort themselves out to get back to good order. 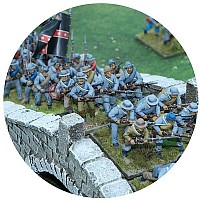 The existing unit classifications for raw / seasoned / veteran in the Two Flags - One Nation rules have been changed to Limited / Capable / Superior respectively.

While these are not typical ACW nomenclature, they give a clearer categorisation for units to be placed into when scenario building, plus, it will serve better when the rules move to cover other horse and musket periods.

The ‘Elite’ rule has also gone, which in any case was a little awkward and could only be applied as an additional status to veteran units.

It has been replaced by the notion of a ‘Notable Unit’, which is a unit that during a battle was perceived to have gone above and beyond what might normally be expected and importantly, it can be applied to any capability category. So for example, a Militia unit, likely classed as Limited, may have done something important or heroic in a battle and we can give a hint of that by making them notable.

Notable status simply allows the unit once per game to re-roll all of their dice for that one roll, regardless of what it is for and it gives the unit the chance to do something that matters in that critical moment. 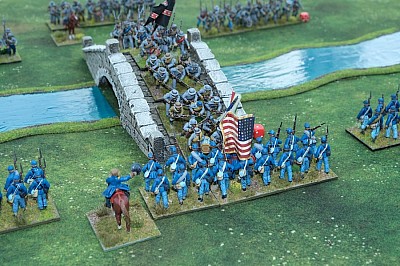 The Union stand against this initial charge, but their pre-charge fire is poor and the Confederate charge goes in. The Union are pushed back, but under fire, the Confederates struggle to deploy on this side of the bridge.

Eventually the Union position collapses as casualties take their toll and the bridge is taken, though the Confederate units are tired and would come under early pressure if they met a fresh enemy counter-attacking brigade.

An interesting tussle and two areas of the rules were clarified as a result of the action. Firstly the term fighting across a waterway will include the term bridge and secondly the nature in which formation changes occur will be more broadly explained. 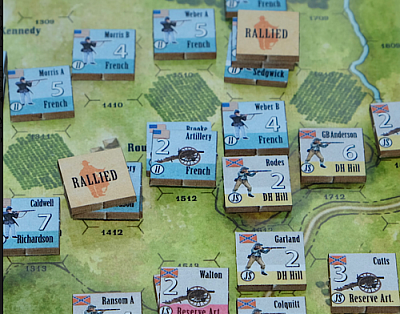 I recently played the Antietam boardgame from White Dog Games and this situation arose. Rodes had placed his brigade on the high ground just in front of the Sunken Lane and was preparing to defend against the initial Union assault under Brooke.

I was an interesting but simple moment to re-create on the figures tabletop, converting the forces from brigades to their constituent regiments. 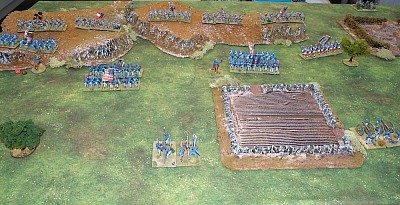 Conversion to the tabletop

To better represent what was going on in the boardgame, the Confederates get off table guns on their left (by adding 12” to the board edge range calculations) from Walton’s battery and the Union get one regiment from Weber ‘b’s formation (on their left), which was otherwise engaging GB Anderson.

As another play test with the TF-ON rule conversion from hexes to the open table, the scenario worked out quite nicely, with the involvement of the various regiments down the line each developing their own narrative as the battle broke down into local fights.

On the last turn, the union cleared the Confederates from the high ground (they would have fallen back onto the sunken lane), but Brooke’s Brigade was not in any fit state to pursue.

The conversion of Brigades to Regiments.

Rodes and Brooke will be present in their entirety. Weber ‘B’ should only have one of the three regiments present (because there is an A and B unit in the boardgame representing brigade) and depending on that decision, the number of Union artillery batteries chosen can help balance the scenario.

Walton’s Battery (off board on Confederate left)

Weber Brigade, but only one will represent the ‘B’ counter

1st Delaware - this will be in the game 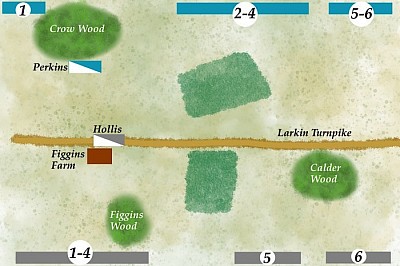 As I convert the rules from hex based to giving an open table version, I am considering adding a new introductory scenario that uses a smaller order-of-battle to help small collections.

It is a fictional scenario set within the fighting around Chikamauga 1863, which starts with a meeting engagement between two cavalry units and then escalates as each side feeds in a couple of small brigades (5 infantry regiments in total, plus artillery support).

To represent that the Confederates have the better maps, their reinforcements, using a D6, are more likely to enter the table more closely to the farm objective than are Union troops. 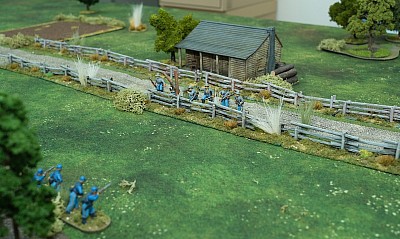 The game on the table

The game went onto the table today and this picture shows the opening of turn 1, as union dismounted cavalry approach the farm, which is occupied by confederate cavalry.

The ideas behind the scenario worked quite well, but the distribution of reinforcements caused some problems with bunching, so a few tweaks have been added for the next play test.

The details of the scenario and an AAR have been covered by the blog. LINK