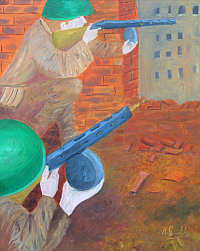 Originally designed as a boardgame using individual tactical maps with a square grid, in 2014, the design morphed into a hex based game using 10 / 12mm figures and was named Tigers at Minsk after one of the included scenarios of the same name.

The most recent version is August 2019 and of late, I have been working on a sister version, for a non hexed open table and have returned the name back to Into Battle.