This project is aiming for 8 - 10 infantry units, 1 mounted and 1 dismounted cavalry unit and two gun batteries (in pairs of 2). For support it will need mounted leaders and casualty bases and then the specific terrain for the period such as snake fencing and ACW buildings.

As a starting point, the Perry ACW 28mm Battle in a Box, offers superb value to the gamer looking for the first building blocks to an ACW collection. The contents are plastic and both sides get 4 infantry regiments, 1 cavalry regiment, 2 guns, 1 commander, a building kit and some snake fencing.

In addition there are a starter set of rules called Firepower, with some scenarios designed to work with the contents of the box. Anyway, this has formed the starting point of the two pocket armies for this collection. 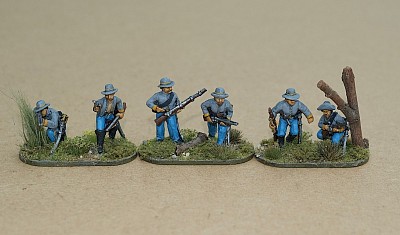 A return to this project for the first time in a while as I take a break from painting Wars of the Roses figures. Unseasonably warm weather for the next couple of days gives an opportunity to rattle can prime some metals.

That means that I can get the additional Perry artillery piece and crew (metal ACW17) done and the two boxes of Perry metal dismounted cavalry for Union and Confederates (6 each), which have been sitting around for a while.

To round out the month, a Union regiment (18 men) of Perry plastic figures have just gone onto painting sticks, awaiting a brush on primer. Altogether, this will bring an infantry regiment and a half battery into the collection and it will allow my mounted Union / Confederate regiments to have a dismounted option / component.

The mood also took me to add another 4 x 8” strips of snake fencing to the terrain box. These have been made from BBQ skewers mounted onto balsa wood bases. Altogether that seems a reasonable output for the month.

At the same time, I have been converting my Two Flags - One Nation rules from hex based to open table and will be running a few play test games through the month, perhaps working towards another scenario to include in the rules, that will be even smaller than the Mill Creek scenario to serve as an introduction and work with small collections (mine). 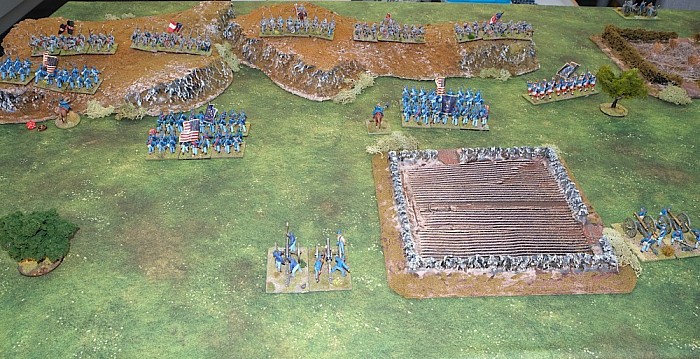