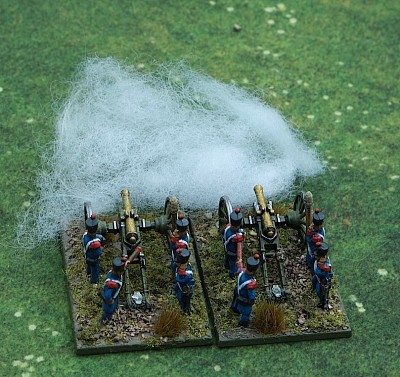 After long delays and procrastination, I have started to jack up my own Napoleonic rules - Eagles at Quatre Bras.

I first put these together in 2015 as a beta set to work with hexes, while also developing an even older set for my ACW, Two Flags-One Nation. The latter became the one that got refined, while the former stood still.

I have tried a couple of times to unite them into a single system, but the problem has always been that not only do they come from slightly different design perspectives, but the Napoleonic set are at a slightly higher level with brigades and hourly turns, while the ACW set are at the regimental level with turns representing 15 minutes.

The title of the Napoleonic set is the clue that they were intended to work for the mid sized battle, while the ACW set are more tactical in nature.

Anyway, the only way to get my long term project to have a system that ultimately will do AWI as well as ACW and Napoleonic was to break some things and so Eagles at Quatre Bras is changing to bring it into the Two Flags - One Nation system.

I have taken the most recent version of TF-ON and am modifying it to accommodate the Napoleonics, so there will be two separate rule books but their mechanics will be 90% based on the same engine.

Having ‘close’ systems can get confusing, so I am hoping that most of the changes can easily be practised via a separate Quick Reference Sheet. Other new rules such as blown cavalry and different skirmish types will be highlighted.

The enthusiasm to do this today is very high - but, who knows about tomorrow :-), Perhaps the time for Eagles at Quatre Bras to become something has come to fruition. 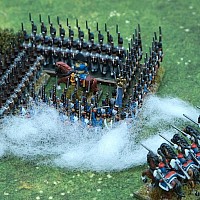 A small sticking point at the moment is some awkwardness in the skirmisher rules.

There are two skirmishing types, those units in which the entire battalion goes into loose order, such as French light infantry and Line Skirmishing in which the line just throw their flank companies forward to screen the line.

I will try and concentrate on this rule area in the next couple of play tests.

I may be using the multi-period ‘bridge’ scenario, that went up onto the blog last week, as an intro scenario to get players used to the rules.