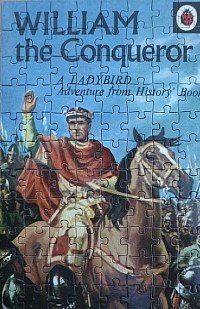 A few years ago at the St. Helens Phalanx wargame show, Liverpool Wargames Association put on a demo table that left me totally inspired.

They had used 28mm on 100mm bases, to give a game on what looked to be a 4’ x 3’ table, using a variation of DBA, so there were probably only around 12 units per side.

This seems the perfect route into building a couple of Pocket Armies for the ‘small game’.

The figures will be sourced as Conquest Games for Normans, Gripping Beast for General Fyrd and Victrix for Housecarls.

It will all have to go onto the back burner, while other ‘front of queue’ projects get advanced a little. (Photo - 88 piece jigsaw from the Hero’s and Heroines series by the Lagoon Group).

The project had an absence of army commanders, an omission sorted when one of the kids kindly gifted me a pair of command packs from Gripping Beast.

The first is William, a mounted figure that has him leaning down to one side, with his command baton outstretched, about to strike a poor unfortunate. It is not obvious in this photograph, but the rearing pose of the horse means that for casting purposes, both front legs have metal connectors between the hoof and the base.

These are obviously meant to be detached, but for a weighty figure like this, I prefer the security of one of the connectors being left in place for stability and preventing any future snapping of the rear legs. I will simply get some tall grasses to cover most of it.

The three axes come as separate items (as do two sheathed swords), with hands attached. The rider and horse are also separate. In each case, the parts were fitted together using super glued with a very small bead of Green Stuff sandwiched between the joints to bed them in.

These are the bases supplied with the packs, but I will likely go to bigger bases and try to make something more of them, perhaps with a couple of extra figures added to the Harold and William bases. 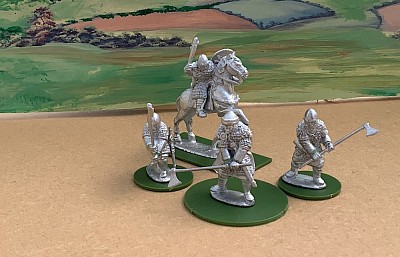 Well, it is a crusades base really, formed from the Perry religious command pack.

There is a write-up about this and other 106 commanders on the blog. LINK