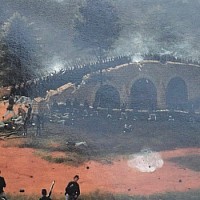 Antietam is the first in a new series of ACW boardgames that has units representing brigades, organised into Divisions and Corps, with a ground scale of 250 yards to the hex and each turn representing one hour of daylight.

We get a full battle scenario, which can take up to 6 hours to play, plus 3 smaller scenarios covering key actions. 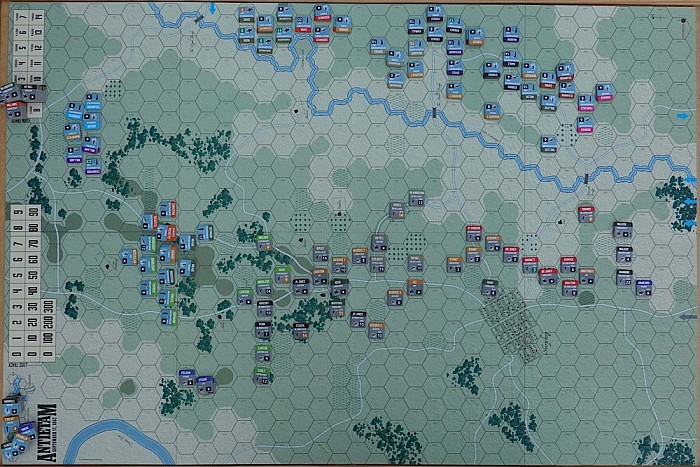 To win, a side will score victory points for inflicting casualties on the other side, plus holding key objectives holds VP’s of differing value to either player.

Importantly, to represent the Union’s piecemeal approach to the battle, on any given tun, they can only activate 2 of their corps, plus 1 additional corps for each objective that they control - a tough one! 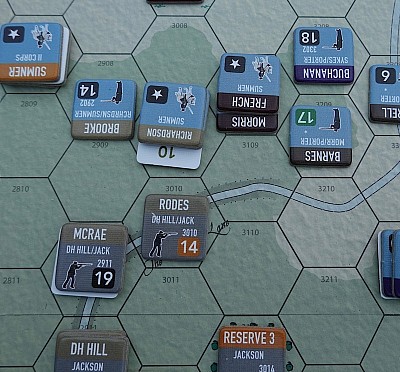 The Union attack opened with an assault on the Sunken lane.

This was an excellent defensive position that was to remain contested for much of the day, seeing many casualties inflicted on both sides and both sides had to rotate fresh divisions into the fray. 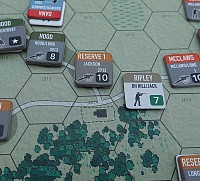 The drive towards Dunker Church

In an effort to score a quick victory at Dunker Church, Williams (Union) took his division past the Sunken Lane and down onto the church.

Even though he had the numbers, his men were inexperienced and were easily halted and turned back by Jackson’s artillery that had formed up in front of the church.

Later in the afternoon, a more determined effort was made by Smith’s Division, but by this time, Confederate defences had strengthened and by the close of battle, the Union had still not managed to take the church.

The Confederate left flank (above).

It was here that the Confederates increasingly went onto the offensive and started to inflict heavy losses on the Union.

To add to the Union misery, Hooker was killed and Doubleday was likewise lost moments later. As casualties mounted, morale lowered and parts of the Union wing began to rout.

Wofford (bottom right) can be seen to have taken up position at Dunker church. The gold square on that counter signifies good quality troops.

With the Union limited to the number of Corps that they can activated each turn, the attack across Burnside Bridge did not happen until quite late in the game.

It is a difficult attack, with only one union unit being able to get across the bridge, before being pinned by the enemy Zone of Control sitting on the heights, which is a great defensive position.

The first assault was quickly repulsed, but this second attack has had a bit more luck, though Manning has just moved down to attack the bridgehead.

The game ended at this point (the 1700 hours turn), so an attack here never fully developed. Perhaps the Union should have acted earlier and sent a division out on an outflanking manoeuvre (it leaves the map and re-enters later on the other side of the creek).

The final act at Dunker Church

As the game ends, the Union brigades of Dana (red) and Hancock (blue) get close to the Dunker Church position, but not close enough to launch an attack before the game ends.

The Confederates get 10 Victory points for holding the church, while the Union get 25 Victory points if they take it, so it naturally becomes a hotly contested hex in the game. 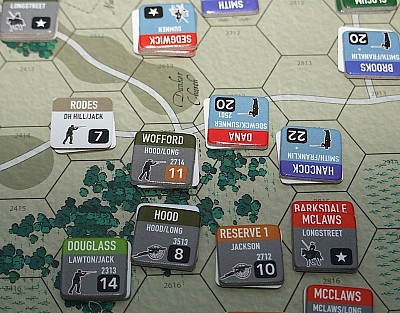 For most of the game, losses to both sides were fairly even. In the last part of the game, the Union flanks collapsed, particularly on their right and the gap in casualties significantly grew. On their left, between the Sunken Lane and Burnside Bridge, it was Confederate artillery that inflicted most of the losses.

The Union captured the Sunken Lane, but failed to get Dunker Church or the Harpers Ferry road and so it was the casualties that pretty much decided it in favour of the Confederates.

A full write up on the game and some observations about the system can be found over on the Battlefield & Warriors blog - LINK.

This site uses cookies to offer you a better browsing experience.
You can accept them all, or choose the kinds of cookies you are happy to allow.
Privacy settings
Choose which cookies you wish to allow while you browse this website. Please note that some cookies cannot be turned off, because without them the website would not function.
Essential
To prevent spam this site uses Google Recaptcha in its contact forms.

This site may also use cookies for ecommerce and payment systems which are essential for the website to function properly.

Google Services
This site uses cookies from Google to access data such as the pages you visit and your IP address. Google services on this website may include: