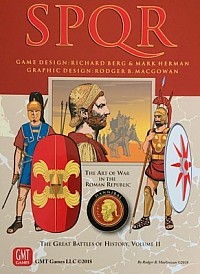 Fighting in the times of the Republic of Rome

The Great Battles of History series started way back in the 90’s with the Alexander module, followed shortly by SPQR.

In 2019 SPQR was re-printed, but the original 5 battle package was expanded to include the various expansion sets that followed, to give us a new self contained package containing  14 battles from Heraclea 280 BC to The Muthol River 109 BC and includes the likes of The Trebbia, Cannae and Zama along the way.

It is quite a detailed system - enough that a few years later an alternative rulebook called ‘Simple Great Battles of History’ was produced, which was stream-lined to give players a choice of what level of emersion they prefer.

We are on the Trebbia and Hanno on the Carthaginian right wing has just released the elephants against Roman the line.

When a unit has absorbed hits equal to its TQ value (the number in the first black square), it routs and is removed from play ……. except for elephants, they ‘rampage’ instead!

Our rampaging elephant is under that ‘5’ marker, which I have placed just to mark the hex. The rampaging unit will attack every friend and foe within 2 hexes, starting with the unit it just fought with and then working clockwise, attacking other units.

Every unit rolls (D10) to pass a TQ test. Failure adds the difference in that score as hits to the unit. If however the elephant rolls 0,1,8 or 9, after any hits are established, the rampaging unit is removed from play.

Here the top Roman counter nearest the rampaging unit was lost and then the stack to the left of it (by the other elephant) took 3 hits, but the die score of 8 also removed the rampaging elephant from play. Very unpredictable!

Potentially the rampaging unit can survive for a while can, next to test in that clockwork direction would have been the ‘friendly’ elephant unit by the river. 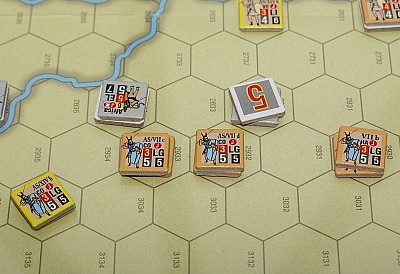 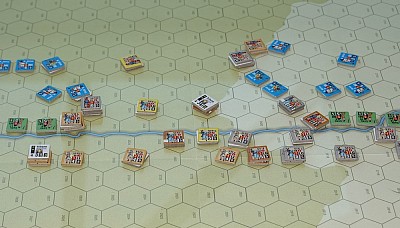 I re-ran the Trebbia battle again and this time the Romans did better and managed to punch their way across the Trebbia River.

This is a view of the centre at the end of play. The green line - Celt infantry has been totally ripped open. The blue line behind them, with good quality Medium and Heavy African foot, have been pushed apart.

The initial break through allowed the Romans to get into the flanks of individual units and inflict heavy losses. In this photo, those blue units have only just recovered the situation and stabilised their front / flanks.

But Roman success here is to no avail because they have lost both flanks and their losses to take the centre have been so significant that they lose the game, having hit their 205 points Army Withdrawal Level (based on loses).

However, this time, the final scores are much closer. The Romans have just exceeded their 205 limit, while the Carthaginians are at 156 (their limit is 190). It still looks to be a losing scenario for the Romans without the balancing options, but a good action to fight out.