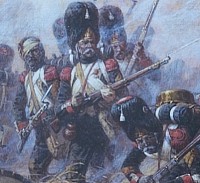 Battles of the Napoleonic era

The origins of this system go back to Triumph and Glory by Richard Berg, published by GMT in 2000. Now developed by Frédéric Bey, the series has since been regularly showcased and updated across a number of publications over the years with around 45 battles covered to date.

Many of these titles have been long out of print, but are being brought back as new editions in the format of duel rules (French / English) and die cut counters. 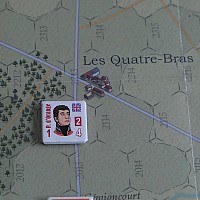 As my re-introduction to the system, I have chosen a mid sized battle, Quatre Bras and have played this three times, including once as a face-to-face game.

There is a blog write up that covers the action, while blending in some of the system mechanics, so while a lengthy post, hopefully, it does reveal what Jours de Gloire is all about. LINK 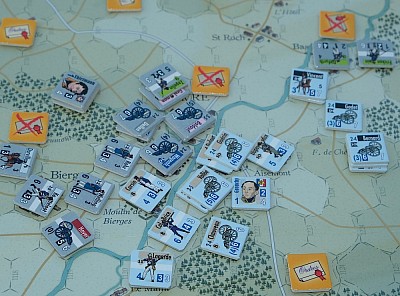 Wavre comes in a two game package with its sister battle - Ligny.

The scenario assume that Blücher has already crossed the River Dyle at Wavre with three of his corps and marched on towards the Waterloo battlefield to assist Wellington.

This leaves us with Thielmann’s Corps, acting as rearguard at Wavre and the assault against them by the French under Grouchy.

Much of the Prussian landwehr have low quality ratings and this is keenly felt when they flip on becoming disordered, making re-ordering more difficult and rout more likely!

However, to reach the Prussians, the French must attack across bridges, which attracts a -3 combat modifier and they also face quite a bit of Prussian artillery, as the Prussian cavalry formations seem to have sent their guns off to defend Wavre.

A difficulty for the French is that they have reinforcements that will a) take a while to reach Wavre of b) will divert towards the crossing near Limale and accordingly be out of command for much of the game unless Grouchy moves to support them.

The Prussians have a lot of small formations and so the order of activation together with all of the above, makes for quite a dynamic game. For some pictures and a write-up of the game, click here; 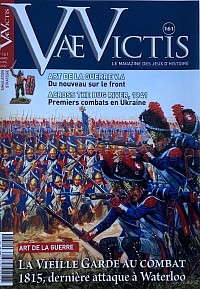 A recent issue if Vae Victis (161) covered the last couple of hours of the action concerning Napoleon’s Guard at Waterloo.

The map is framed by the farms Hougoumont, La belle Alliance and La Haye Sainte and so is looking at the central section of the Anglo-Allied positions.

The game is compact, and only last for 5 turns, so makes for an easy game for most tables and tight limitations that gamers may have on playing time.

There is a post up on the blog covering a play through. LINK