Eagles of France by Hexasim 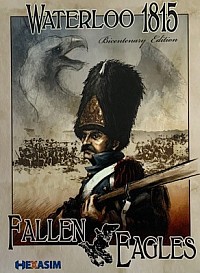 Units are brigades, but activated by their corps. Players alternate activations and actions can be limited by the orders that have been set for the Corps. Orders generally involve a map destination, effectively keeping the corps together and acting in unison.

Ground scale is roughly 200m per hex. Each game except Quatre Bras are two mappers and the core scenarios are based on the full battle, though each set does have some smaller introductory scenarios - with The Street of Ligny being my favourite. 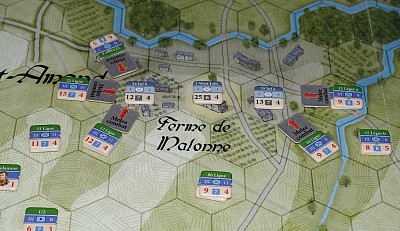 This is the first of 2 introductory scenarios in Hexasim's Eagles of France system for Ligny 1815.

The villages of St. Amand and La Haye sit on the right wing of the Prussian defence. Vandamme’s III Corps was tasked with taking control of these villages and to compel the Prussians to engage as much of their force as possible’.

This is an engaging scenario that gives the French the tough task of capturing key locations in four hamlets in a fairly short game.

The Prussians can draw upon reinforcements, but must pay the enemy victory points for bringing them on.

There is a write up on the blog that covers an AAR and observational notes.

This is a useful title in the series as it offers gamers the chance to play a full battle on a one mapper, to date, the other games in the series use two maps. It also has the latest rules and a relatively small order-of-battle for the historical scenario.

For those that want to, the module also includes a thin map street that allows the game to join the Quatre Bras battlefield with the Ligny two mapper module, with campaign scenarios that allow those two battlefields to interact with each other.

Historically the French delayed their attack, so that by the time they got underway, the Anglo-Allied reinforcements were already arriving on the battlefield.

In most respects the game plays out along similar lines each time, but down at the hex level, there is a lot of intrigue that draws the player in, plus the systems use of orders and variable turn lengths adds an extra dimension.

There is also a ‘what if’ scenario that has Ney attacking three hours earlier at 11 AM, which makes a good introductory scenario.

At the time of writing, I have just put the game up for the 2021 anniversary and there is an article over on the blog that covers that action. LINK 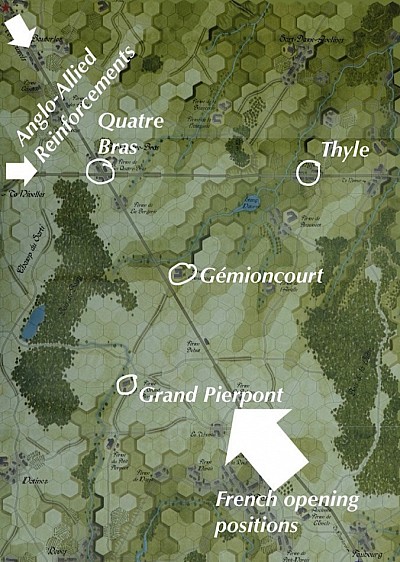 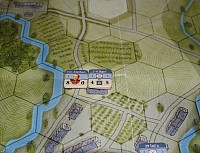 The Ligny module has two introductory scenarios, both are just four turns long.

Streets of Ligny sees a French Corps trying to take the Ligny village, which is lightly held by the Prussians, but reinforcements are on the way. I find this is a tough one for the French, but it is a fantastic scenario for depicting napoleonic warfare in an urban environment.

St. Amand / La Haye is a lovely full map, with exploded large hexes and this  covers the Prussian right wing, which is lightly held. Vandamme has been ordered to take his corps and put pressure on the wing to encourage the Prussians to send more reinforcements there.

The Prussian reinforcement schedule is optional and the player may choose how many reinforcements to send ….. but for each group you release, the French automatically gain a number of victory points equal to the number of units sent.

The Prussian player must balance holding the wing, without it sucking in too many reinforcements. It is a clever and engaging scenario.

The seven turn, two map, historical scenario concluded today. I have placed seven glass beads on the map to highlight where victory point objectives are.

There is a full after action write-up over on the blog.